So long, sew along

Well, it's that time folks, time to display the pants in all their g(l)ory. First let's recap the changes made to the pattern (Burda World of Fashion 09-2008-125). There's vanity sizing, and there's German sizing. I started with a 16 and had to grade them up to a 20! A 20! I'm deeply shocked, but not to the point where I avoided the Toberone in the pantry.

So I traced off the 16 (42) and basically added 3 inches to the waist and 2 to the hip and thighs. Now partly this is just because I prefer more wearable ease than 1 inch. 1 inch is not wearable ease, 1 inch is unwearable ease. You can not bend down to pick up a child with 1 inch ease, not unless you are sewing something with elastine or lycra. Now I know why they had their model saunter down the driveway. There's no way she could have got out of the car in those pants. Who needs a safety belt with trousers that tight? I tell you she's going NOWHERE. 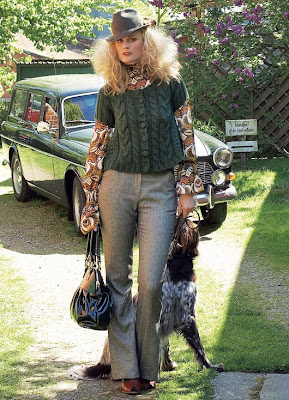 So here in very crude form is the summary of changes. There were 13 major and a few minor. Some of the major were done twice, sometimes I added too much and had to trim back. Sometimes not quite enough and had to add more. It wasn't hugely time-consuming though, just fiddly. 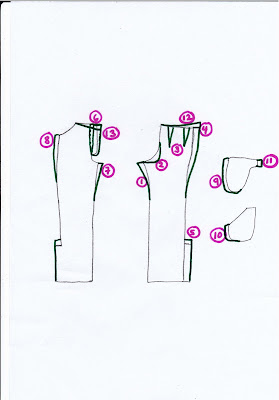 As I mentioned previously I used wool suiting that I bought at a charity shop for the outer. Now this is a top quality fabric, but it's very masculine looking, and it gives the impression of earnestness and conservatism, like it's hiding something but presenting a respectable face : fabric for a dodgy accountant or lawyer for the mob.

I was going to make another pair in something more feminine and tweedy, but everything conspired against me. Benjy went ape in the fabric shop and I had to leave almost immediately. My sewing scissors suddenly went blunt. I am very careful to use them only for fabric, so that was really really weird. I ordered in a new Bernina but it won't arrive till next week. How many signs do you want? I just knew that the powers that look after weary mothers make sure they cannot overdo it on last minute sewing binges.

Anyway, I'm not 100 % sure of the silhouette. Can a not-very-skinny person really wear skinny pants? On the one hand, the vents create a flare at the bottom which balances out the thighs, so it's not too much like a house on stilts. The pockets are handy, but finish at the widest point of the hip. The full pant top is useful if you wear your briefs bigger than Rocketboy's, but they double your crotch length, which inevitably makes your butt look bigger. For me the biggest worry is all the extra fabric around the waist line.

The back view, pretty good:

And look at that thigh! 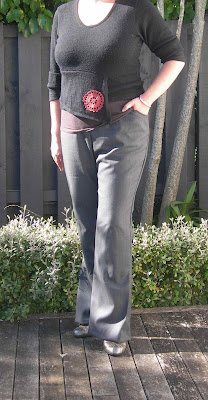 Here are the vents in more detail: 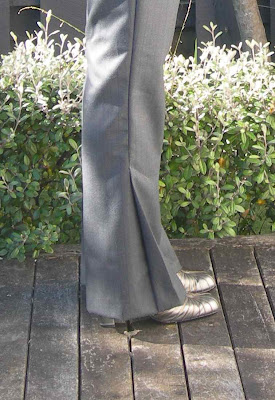 When all's said and done, I'm quite happy with these pants, so we'll say a success. I thoroughly enjoyed the sew-along, visiting new blogs and hearing about others going cross-eyed because they've been looking at their pants too long trying to work out how to fix all the pulls and gapes. Thanks to Antionette for managing this so ably and professionally and having the energy and enthusiasm to carry it along, and to Diana for getting the whole thing on the road.
Posted by Mary Nanna at 7:54 AM

Folks who love sewing too:

Burda sewers - we're in this together:

Wow how great of you to sew for your kids:

You sure are handy:

I just want to copy everything you wear: